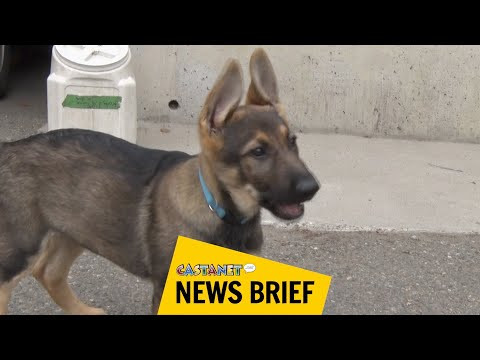 It didn’t take long for the Tournament Capital’s newest police dog to take his first suspect off the streets.

After seasoned police dog Fargo recently retired from the detachment, new pups are working to fill his vest. One of them is Marook, who is just under two years old.

He and his handler both graduated recently from an RCMP dog training academy in Alberta and, earlier this week, Marook caught his first suspect.

“We got to catch his first bad guy the other night, so that was exciting for both him and me,” Const. Kevin Challoner, Marook’s handler, told Castanet Kamloops.

“There was an impaired driver that took off from a collision up on the Coquihalla Highway. He tracked him down the highway for about a kilometre and we ended up finding the guy, so it’s very, very rewarding.”

Marook lives with Challoner, his wife and kids. According to Challoner, he fits right in.

Marook is not the only new dog in the detachment. Peeka is a puppy who is living with a Kamloops RCMP constable. The officer is hoping to work as a dog handler one day in the future, and fostering young police pups is one of the first steps in that process.

Being a handler to a fresh dog is a lot of work, as the young animals are still constantly learning — but Challoner said all of that is worth it.

“This is without a doubt the best job in the RCMP in my opinion,” he said.

“And I think those of us that do it are very passionate about doing it.”

Despite Marook’s loud bark and big bite while on the job, Challoner said the dog is still a companion.

“He’s very social and he likes people,” he said.

“These guys [the dogs] are very bonded to us like that.”

While Challoner is enjoying the start of the dog-handling process, he said he’s not a fan of how police K9s are often perceived.

“I think that’s one of the misconceptions was that our dogs are very savage,” he said.

“That’s one misconception I think bothers me personally, because it’s just it’s not very factual about the professionalism that our dogs have. … I think going through training and then experiencing different calls, I think we really fail to give them the credit they properly deserve for how skilled and talented they are.”